Dog owners have been warned to not use human toothpaste to combat their dog’s bad breath, after new research found that nearly 8 per cent of dog owners had tried to offset their pooches bad breath with a human toothbrush and toothpaste.

The RSPCA said the presence of fluoride, along with the occasional use of the artificial sweetener xylitol, in high-street toothpaste brands could prove toxic to dogs if swallowed.

The survey, commissioned by pet food company Lily’s Kitchen, quizzed over 2,000 pet owners on their habits, and even found that some owners were feeding their animals mints in an effort to improve their bad breath. 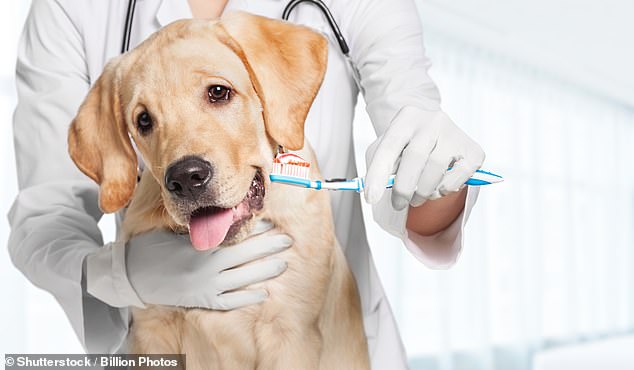 Dr Nicola Robinson, head of the Veterinary Poisons Information Service told The Telegraph that small doses of fluoride which can be found in human toothpaste can give dogs diarrhoea and induce vomiting, as it resides the calcium in the blood and increases potassium levels.

This is while the presence of xylitol in certain types of toothpaste could prove even more serious – potentially leading to death if left untreated.

Caroline Allen, London veterinary director at the RSPCA, said: ‘Not only will pets be less likely to tolerate the foaming and the minty flavour of human toothpaste but there is also a risk to their health from swallowing human toothpaste. 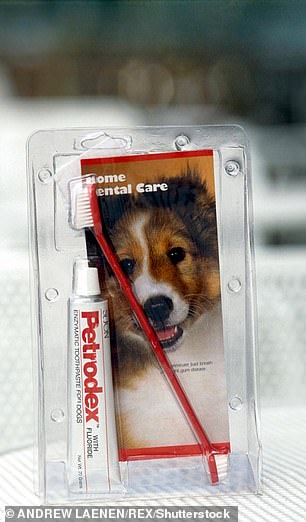 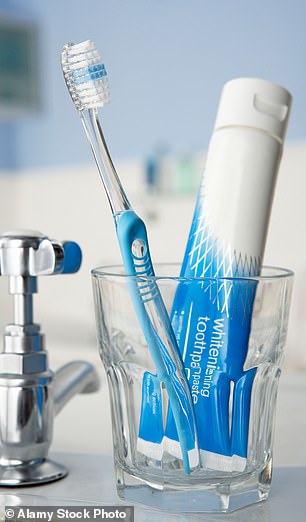 Various brands produce toothpaste for dogs (left). Dog owners have been urged to not use human versions (right)

‘While there is a potential risk to pets from the ongoing swallowing of fluoride…the inclusion of the artificial sweetener xylitol in toothpastes is a more serious concern as this is much more toxic and products containing this ingredient should not be given to dogs.’

According to the Kennel Club, dental disease is the second most commonly diagnosed health issue for canines.

A spokeswoman for the charity advised long-suffering owners to brush their pet’s teeth daily with specialist toothpaste, instead of using products designed for humans. 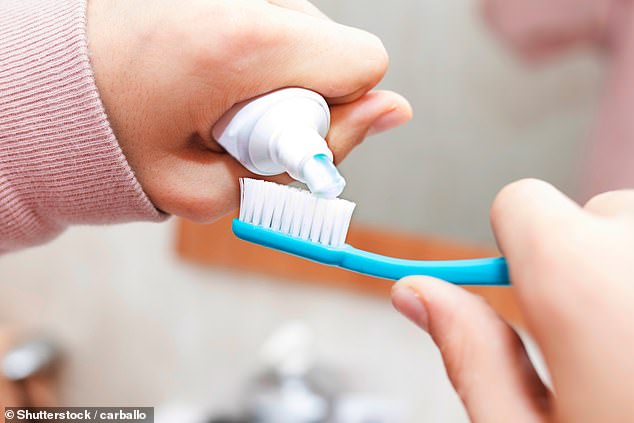 While some dog owners admitted to using human toothpaste on their pooches, others even said they had fed their dogs mints to combat bad breath

‘While we applaud owners who take responsibility for caring for their dogs teeth, we would also stress that only toothpaste formulated for dogs should ever be used,’ the Kennel Club spokeswoman said.

‘Some specialist toothpastes for human-use contain ingredients which are unsafe for pets, for example xylitol, an artificial sweetener that is very poisonous to dogs.’ 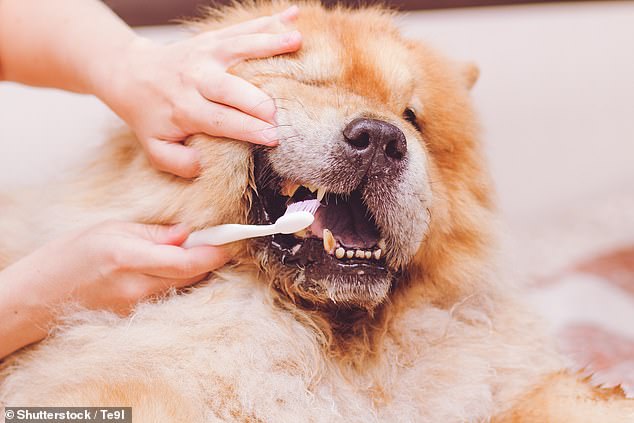 More than half of the dog owners surveyed said they thought bad breath was normal, rather than a symptom of poor dental health. This is while others admitted giving their dog chewing gum when bad breath struck, while some even thought a haircut would purify the scent.

Some respondents thought their dog’s unsavoury habits might be the root cause – and sought to keep toilet lids firmly shut to stop them drinking the water.

A fifth of dog owners worried about bad dog breath being a sign of a serious health problem, the survey found. 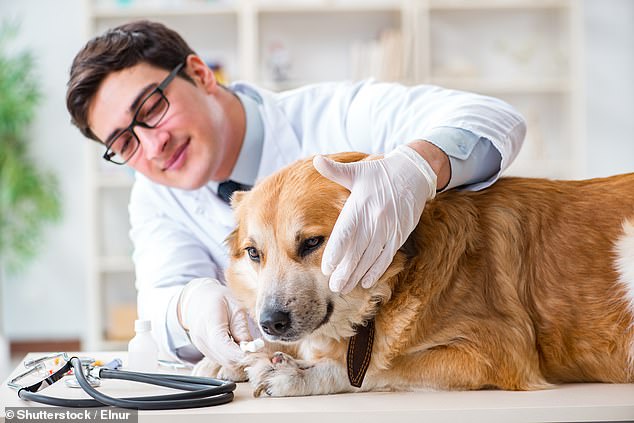 Rodney Zasman, a leading London veterinary surgeon, said: ‘A lot of dog owners aren’t aware of how important it is to look after their dog’s dental health.

‘Bacteria can spread from the teeth and gums causing damage to the kidneys, liver and the heart. Painful and extensive dental surgery and treatment may be needed to cure this.’

Why you shouldn’t use human toothpaste on your dog

While maintaining the dental hygiene of your pet pooch is paramount it’s important to use the right products and to not just use human versions, especially when it comes to toothpaste.

When brushing your dog’s teeth, you should only use specially formulated canine toothpaste, this is because the additives and agents added to create foam in human toothpaste are not great for the digestive system of humans, let alone dogs. While humans can spit this out and rinse dogs tend to swallow it. This can ultimately cause liver disease in canines.

Several brands of human toothpaste use xylitol as a sweetener, when dogs absorb this ingredient they have surges in insulin followed by a rapid drop in blood sugar which can lead to seizures, liver damage and in some cases death.

Human toothpaste also includes fluoride to prevent decay of teeth. However fluoride can be detrimental to your pet’s health. Too much fluoride can lead to excessive drooling, loss of appetite, vomiting, restlessness and if left untreated could also lead to cardiac failure.